4 Ways Learning to Code is Like Learning A Language 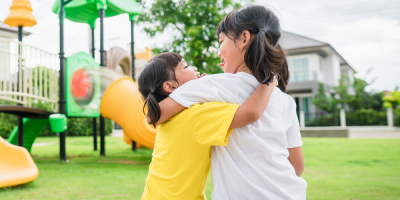 4 ways learning to code is like learning another language

Is learning to code like learning a language? Well, there are some very striking similarities!

It’s not hard to see why coding is important for the future prospects of our bright young minds. But did you know coding can actually help brain development and the development of soft skills as well as setting a foundation for STEM fields?

It turns out that learning to code has some similarities to learning a new language. Some states like Texas in the US even allow computer science courses in coding to count towards graduation requirements under the category of “languages other than English.”

While that may not have been the wisest decision because language acquisition is important too, it clearly illustrates the importance of coding for young people.

Is coding a real language?

In short – no. From a strictly academic and linguistic perspective, only naturally occurring languages that are developed out of the organic inclination to communicate qualify.

But the process of learning both a language and how to code has some striking similarities when we’re talking about the development of young people.

Linguistic competence builds and cultivates a powerful connection with the people who speak it. Learning to code also helps children build connections.

While coding and learning a language are fundamentally different, exploring the interactions between the two can teach us about a lot about the way children learn and process information.

Here are 4 ways learning to code is like learning a language:

1. Both coding and language are tools used to build a creative narrative.

When people learn to code they’re learning a structure that is similar to learning grammatical rules. Learning to code also teaches kids how to break down complex ideas into simple steps. Learning language is done the same way. We learn vocabulary and simple sentences before we’re engaging in conversations or monologue to a captive audience.

But once you’re beyond the basics you’re able to use both words and code to create complex narratives that have the power to change the world. As evidence of that we needn’t look further than a charismatic world leader or the way social media has changed the way we communicate.

One of the fundamental differences between learning to code and learning a language is that coding is more easily acquired.  A child could spend six months studying Javascript and become fairly good at Javascript; if the same child spent six months learning a foreign language, they’re still very much a beginner.

2. Both coding and language require breaking it down into small steps

Both learning to code and learning a new language help young people learn how to break down large and potentially intimidating tasks into smaller projects.

When kids first learn to code they’re usually tasked with a project like learning to make a shape. They are then taught how to recreate the same code to make multiple versions of the shape rather than recreating the wheel.

Language is taught in a similar way. We learn to form similar sentences using the same steps we’ve learned before. These skills are then transferred from the classroom to the everyday lives of young people which ultimately teaches them valuable lessons in applying what they already know, time management, and utilizing the skills in creative ways.

Experiential learning is definitely an industry buzzword at this point, but if we take it back to its roots, there is no debating that both learning to code and learning a new language are best learned by actually participating in the activities.

There’s no debating that learning Spanish is both easier and more rewarding when you’re in situations where you’re actually using it in your everyday life.

Coding is the same way. When it’s all based on theory it’s nowhere near as fun and interesting as it is when you’re applying the skills your learning to creating things and solving problems.

4. You learn by making mistakes

Sure, you can learn both  from books but actually speaking with people and bringing code to life will always teach you more through trial and error than you’d learn in a purely academic setting.

When you’re learning to code, if something isn’t correct it won’t deliver the outcome you’re hoping to achieve.

This is wildly helpful to the learning process of young people. They spend the majority of their time debugging and looking for the solutions to errors in the code. In doing so they have to do their own research, seek out resources around them, and maybe even consult the help of a friend or their teacher.

The process helps them to learn to solve problems in their everyday life in a similar manner.

Learning to code has many similarities to learning a language

As you can see, although not exactly the same, learning to code has many similarities to learning a language. Both have many advantages!

Katie is a mom of two rambunctious boys and a self-proclaimed super nerd. With a background in neuroscience, she is passionate about sharing her love of all things STEM with her kids. She loves to find creative ways to teach kids computer science and geek out about coding and math.  You can find her at Teach Your Kids Code. Check out her facebook page too! 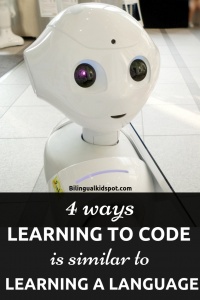