What to Expect & How to Prepare for a Bilingual Speech or Language Evaluation?

Bilingual Baby Brains: Why the baby brain can learn 2 languages at once

Have you ever wondered how the bilingual baby brain works? Have you wondered how it is possible that babies can understand two languages at once and why the baby brain allows them to do so? Well, if so, you are not alone.

In this post you’ll Mary-Pat OMalley from TalkNua explains how truly amazing your baby’s brain actually is!

When does the baby brain start to understand languages?

What? Yes- that’s right! The baby brain is amazing isn’t it? You can have a bilingual baby from before birth.

It’s amazing but makes total sense when you think about it. Babies start to hear at about 26 weeks in utero.

Now it’s not like hearing on the outside because the sound waves have to pass through skin and muscle and amniotic fluid. So it’s going to be muffled but the research is clear about what babies can hear before they are born.

Babies can hear things like pitch, some features of rhythm, and some specific speech sound information.

Your baby can also perceive your speech through bone conduction where sound waves vibrate in the bones of their skull.

There’s even evidence that your baby can hear and remember speech sounds before birth. And she can respond to and distinguish different between speech sounds like /b/ and /z/ for example. Isn’t that amazing?!

How does the bilingual brain work after the baby is born?

New born babies show a preference for their mother’s voice at birth. Only a few days after birth, new born babies respond differently to language and to non-language sounds. Very young infants prefer to listen to speech over non-speech sounds.

Newborns also recognise stories that were only read to them before they were born.

Distinguishing one language from another in a bilingual baby is robust at birth and the language preferences that they show at birth reflect their previous listening experience while still on the inside.

So it’s never too early to start your baby’s multilingual journey because your baby is learning about properties of their native language(s) while still in your womb.

Infant speech perception- the beginning of your baby’s multilingual journey.

When babies are learning one language, they have to detect and learn the features of one language from what they’re hearing around them.

When they’re learning two languages or more, they have to detect and learn the regularities of each of the languages at the same time.

This means they have to recognize their particular languages as native while continuing to discriminate them as distinct from one another.

They have to notice that the input is structured differently for the different languages and they have to be able to separate the input from each of their languages.

The interest babies show in all of their languages from birth helps them pay attention to the languages and learn them gradually over time.

Babies are born to learn languages

When babies are born, they are born with the ability to distinguish and produce all of the sounds of all of the world’s languages.

Gradually though these abilities narrow to the sounds of the languages that they are being exposed to. This starts to happen at about 6 months of age.

So if you want a bilingual baby, start early!

How do babies work out the different languages?

Words are made up of sequences of vowels and consonants. Your baby also needs to work out the rules for each language.

There are studies showing that 9 month old babies show a preference for words made up of possible sound sequences in their mother tongue as oppose to combinations that are not possible like ndugu in English.

Regular exposure to their languages helps them to learn all of the relevant features of the languages. And all of this learning will help them recognise and say words.

It’s not just about listening. Looking is important too.

One study exposed English-only babies and French-English babies to videos of three bilingual speakers saying sentences in one language with the sound turned off. This meant they only had visual information available to them.

At the two younger ages, the monolingual babies could distinguish between French and English just by looking at the speakers’ face with no sound. But by 8 months of age, they couldn’t do it any more- use it or lose it! The bilingual babies were able to do it at 6 and 8 months of age.

Maintaining their sensitivity to cues in faces talking in different languages gives them another source of information for keeping the languages separate.

The bilingual baby brain is amazing

Can you believe that all of this is all happening in the baby brain before they even start saying their first words!  Bilingual speech and language development really is amazing and a bilingual baby brain can do amazing things! 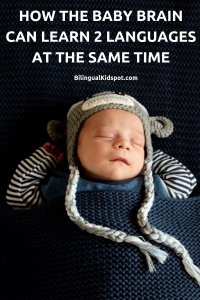 What to Expect & How to Prepare for a Bilingual Speech or Language Evaluation?