Raising a Trilingual child has challenges but it is worth it

Raising a trilingual child when the community language changes

Raising a trilingual child is no easy task. But when a family moves from one country to another where the community language is different, it can be even more of a challenge.

Elisavet Arkolaki (Liza), is the spirited mum behind Maltamum. She is raising two trilingual kids speaking English, Norwegian and Greek. Liza and her family were originally living in Malta, where English was the community language, and recently moved to Norway. This is their story, and how they manage their language exposure with their trilingual kids.

We have two children aged 4 years and almost 1 year old. It was natural for us to use use OPOL, as I don’t speak Norwegian, and my husband doesn’t speak Greek. Each of us speak our mother tongue with our children, and English has become the family language.

For the first 2 1/2 years of my eldest son’s life the community language was English as we lived in Malta. Everyone in Malta speaks English so since we don’t speak Maltese, all social interactions for us were taking place in English both with Maltese and expats.

Our son went to a nursery in Malta only for about 1 month when he was 1 1/2 years old. My husband worked from home, and I was only working part-time from home, so as a result our son has been involved in our daily activities and exposed to the languages through environmental and social settings.

Working home based has also given us the possibility of travelling often and spending time to the different countries where the 3 languages are spoken. Spending lots of time with us during the first and most formative years helped our children lot. Along with spending time in the native countries where the languages are spoken, therefore gaining more exposure. In my opinion these factors were crucial for the development of their language skills. Nothing was forced, it just came naturally. 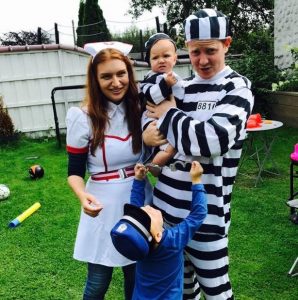 Moving to Norway and Changing the community language

A year ago we moved to Horten, Norway, where Norwegian is now the community language. I still don’t speak Norwegian so English still has great exposure as whenever I am present, people speak English.

We had been spending lots of time in different places and countries at a time, so the move didn’t really affect our son as he’s used to being moved around since birth. He’s very adaptable to places provided that both his parents are there. Plus, the paternal grandparents and aunt’s family are here in the city that we currently live in, so this made the whole process even more smooth.

Trilingual kids, but a change in fluency

After having spent one year here in Norway, and going to the nursery since August 2016, Erik is now fluent in Norwegian. Greek follows next (fluent but with less vocabulary), and English has fallen back as his third language (instead of first).

After a few months in Norway, Erik still understood most of our conversations in English, but he would choose to reply in Norwegian or Greek. Since he started going to the nursery, and then with the arrival of his baby sister, I haven’t been able to spend as much time with him as I used to.

Eventually, Greek also fell behind, as he was developping his vocabulary in Norwegian, and he didn’t have the words for the new words hat he learned in Norwegian in the other two languages. Eg. He couldn’t describe his ‘Sami’ theme day at the nursery to me when he came home.

It took us two trips to Greece ( 1 1/2 month and 1 month respectively) where he was fully immersed in the Greek language to catch up and maintain the language at a native speaking level.

Now after one year in Norway, he sometimes gets upset when we speak English. His understanding of English has decreased, and he often asks us to talk to him in our native languages. He still understands basic conversations and words here and there but he cannot cope with more complex ones.

I am not worried about the deterioration of his skills in the English language though, because he will catch up and learn it properly once he starts school as it’s in their curriculum and all Norwegians learn good English through their school system.

When it comes to imaginary play, he sometimes plays and talks to himself in Greek, and others in Norwegian. Since he was about 3 years 8 months he has been able to interpret in Greek and Norwegian. If for instance he was a conversation with someone in Norwegian, he will turn and tell me in Greek what they are talking about and the other way round. He will now usually tell people in advance that ‘mummy doesn’t speak Norwegian’ and he will help out lol.

Nelly is now almost 10 months and has started bubbling. She will say ‘mam’ for food, her first word, which in baby lanaguage in Greek means food, ‘ne’ for water (in Greek we say ‘nero’ and ‘mama’ for mum (in Greek we say ‘mama’). So like her brother, she’s starting with the language that mum speaks, Greek, as she spends most of her time with me. Soon though Norwegian will take over.

How we will try to keep up all languages

Our plan in order to keep up with the development of the languages is to keep on travelling as much as possible, continue using the OPOL method and spend more time with expats and kids of mixed nationalities in our city to practice English.

It’s hard to tell how are the kids going to communicate with each other in the future. At the moment, when Erik talks to his sister he uses Greek when it’s just the three of us, Norwegian if they are with daddy, and any of the two when we are all together.

I suspect though that they will prefer to communicate in Norwegian and probably Greek when they would like to say something in between them ‘in secret’.

Kids are smart and they tend to adapt to their environment and learn best, and prefer to use, the language of the community. I’ve seen it with friends and we have now experienced it ourselves. I am looking forward to seeing how our trilingual kids develop! 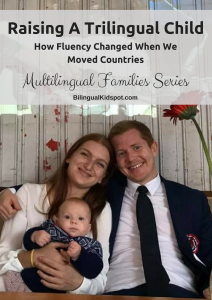