Julia Festman, Gregory J Poarch, and Jean–Marc Dewaele are researches on multilingualism, and are also parents of multilingual children themselves. Together they are the authors of the newly published book, “Raising Multilingual Children”.  Based on each of the authors’ different family experiences, this book is an informative guide with research based advice, along with many practical ideas and tips on how to raise nurturing happy multilingual children.

This post may contain affiliate links to help run the site.

The Authors of Raising Multilingual Children

Jean-Marc Dewaele is the father of Livia, 20, who speaks English, Dutch, French, some Spanish and some martial art Japanese. Jean-Marc works at Birkbeck, University of London, in the UK.

Gregory J. Poarch is the father of Loic, 15, who speaks Dutch, English and German. Gregory works at the University of Munster, Germany.

Julia Festman is the mother of Aya, 12, and Noam, 8 who speak German, English and some Hebrew. Julia works at the Pedagogical University Tyrol in Austria.

The idea of writing this book came up while the three were chatting over an aperitivo at a “trilingualism conference” in Bozano in the north of Italy. 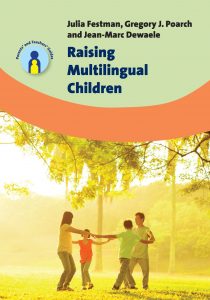 Definitely my favourite part of “Raising Multilingual Children” is the metaphor they use at the start of the first chapter from Colin Baker 2007.

“Parents are like gardeners that prepare the soil, plant, water, and care. Growth in languages is greatly promoted by skillful gardeners, but is also affected by the nature of the plant, other flowers in the garden, the changing in environment, and shifting language climates.”

The authors talk about parents being the gardeners, and children the gardens. They talk about how much attention is needed to keep these gardens growing. They use this metaphor throughout the book and it really is a great way to look at the multilingual parenting journey, and to understand how much work is actually involved. It is not easy, and sometimes things don’t always work out how you plan, even with all the nurturing you do.

The benefits of raising multilingual children

In the first chapter the benefits of multilingualism are outlined. They give you great reasons why you should introduce languages early on. I, myself can go on and on about the benefits of children speaking multiple languages! It is a great introduction for parents who are still not sure about taking this path.

The second chapter dives straight into their personal experiences giving details of how the authors raised their own multilingual children.

The first and main story is that of Professor Jean-Marc Dewael.

Jean-Marc, who’s daughter Livia is now 20 years old, tells of how when she was born in the UK, he spoke French with Livia, his wife spoke Dutch with her, and they spoke English together.  He goes on to explain how Livia was also exposed to Urdu through a Pakistani babysitter.

The professor admits himself that he was a bit sceptic about the fourth language and was worried about her language acquisition initially. However, his worries of course turned out to be unfounded. As we know from extensive research, children are in fact able to understand multiple languages from a very early age without problems.

He also tells of of Livia’s many academic achievements through her childhood. And then he goes into detail describing how their family dealt with the challenges which arose while Livia was growing up.

What I really thought was interesting is that the Professor’s family story also includes a letter that Livia wrote when she was 16 years old. In this letter she describes how she felt about her multilingualism and how it was affecting her. While we hear a lot about how parents deal with raising multilingual children, we rarely hear from the children and what they thought of the experience growing up so it is nice to hear from the other side.

Julia’s two children, Aya and Noam were raised with three languages from birth, English, Hebrew, and German. English was initially only a passive language used between their parents, but later became one of the languages used as family. She tells of how Hebrew began to fade when Julia’s husband passed away, and their exposure to the language was dramatically reduced.

Gregory’s son Loïc was raised speaking two minority languages at home, English with his father, and Dutch with his mother. Germany was the community language and he went to a bilingual English – German daycare. Greg explains how Loïc’s language proficiency varies depending on his exposure to each language and gives some interesting examples on how he deals with situations such as speaking the minority language outside, and when other people are around.

Each of the authors has a different story with different circumstances, however they do share one main thing in common. Each of the authors is multilingual themselves. Therefore, it should be noted that the book doesn’t really include much guidance on situations where one parent may feel isolated or detached during family conversations. For parents who don’t speak their partner’s languages this can be a difficult challenge along the multilingual parenting journey.

In the third chapter, the authors summarise the different ways to raise multilingual children describing the different strategies families can use depending on their circumstances. They then go on to talk about how much input is needed for a child to become proficient in each language.

Chapter four emphasises family goals and what I thought was quite useful is that they provide tables to fill out using your own family information in order to determine the best way for you to move forward according to those goals.

Finally, the last chapter gives ideas and practical tips with examples on how you can create a multilingual home, and give your children exposure to the languages they are learning. While they don’t go into extensive detail, there is a great overview of advice on how to deal with the challenges that will rise, and how you as a family can try to overcome them along the way. For example, what parents can do when children make mistakes, mix languages, or when they refuse to speak a language altogether.

What is very useful is that in all five short chapters of “Raising Multilingual Children”, the authors draw on their own experience giving examples from their family stories on how they dealt with particular situations.

Academic research together with personal experience

“Raising Multilingual Children” is a great mix of personal advice based on experience, as well as information based on academic research. With examples based on three different family situations, this book makes you realise that there is no “one fit solution” to multilingual parenting. Not all families are the same, therefore you can select and use the information which is relevant to yours.
“Raising Multilingual Children”  It is an informative read for any family who are seeking to raise children with multiple languages.

You can find Raising Multilingual Children here on Amazon“Keep watering the garden” even if your child doesn’t speak back in the minority language, as long as they hear it, it is something.

For further information you can listen to this podcast with Professor Jean-Marc Dewaele where he talks about “Raising Multilingual Children” and gives further information on his own family story. If you are raising a bilingual child, you may be interested in “Maximize Your Child’s Bilingual Ability” which I also recently reviewed.

This giveaway is now closed

I received a copy of “Raising Multilingual Children” from Multilingual Matters, the publishers of this book. They have generously provided Bilingual Kidspot with 2 copies to give away to our followers. For your chance to win a copy, comment below with the following information:

Name, Languages your children speak, and main reason you are raising multilingual children?: 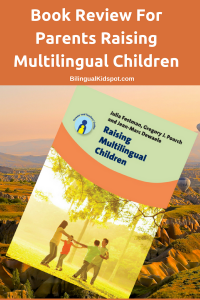 Bilingual Kidspot is an Amazon Affiliate. You can read more here. Thanks for your support.