Cute and Funny Things Bilingual Kids Say and Do

Cute and Funny Things My Bilingual Kids Say and Do

Bilingual kids are absolutely adorable. There is just something so beautiful about watching bilingual children switch from one language to another. Whether it be children who have been raised bilingually from birth, or those learning a foreign language, it is incredible being able to witness their experience.  And it can also be quite amusing listening to some of the things they come out with too!

My children are bilingual, their native languages are English and Italian. They are also learning Spanish as a third language. Some of the things they say and do are so cute and funny. I know it is all part of the learning process, but I can’t help but laugh sometimes. Here are just a few things my bilingual kids say and do that make me smile, as well as a quotes from followers with their own cute and funny stories.

They try to “Italianise” the English Language

Borrowing grammar from another language is common with bilingual kids, and also adults. English and Italian are very different and sometimes my kids use the word from one language but the grammar from the other.

So they say “cuddliamo” when they want to cuddle. Instead of saying “Let’s cuddle” in English or “abbriacciamo” in Italian, they take the “iamo” from Italian and add it on the end of the English. “Cuddliamo”. This is one thing I actually don’t correct them on, and I end up saying it too, because it is too sweet.

Italian and Spanish are quite similar in some ways. Some words almost sound almost the same, but then there are some words which are completely different.

When my eldest son was learning Spanish he used to mix a lot. When he didn’t know the Spanish word he would just put an “S” on the end of the Italian word. It was like he thought Spanish was just Italian with an “S”. I must admit that it can sometimes sound that way, and sometimes it was actually correct. I thought it was quite a smart way of thinking too.

They make up words and pretend they are speaking another language

We always talk and learn about different languages and cultures, and my children are aware there are more languages in the world than those they speak. Sometimes they make up their own words and start talking to each other in gibberish. When I ask what they are speaking, my son says “We are speaking Russian mummy, we are pretending we are in Russia” or another random language he doesn’t speak.

I am sure all kids do this in their native languages but bilingual kids have the advantage. My almost five year old likes to pretend he doesn’t understand me if I am asking him to clean up his toys because it’s dinner time for example. I know he speaks and understands English very well, to a native level, but he still tries to be funny and laughs at me pretending he didn’t understand. “Oh you said put my toys away? Sorry I didn’t understand, I thought you were saying something else” and laughs at me. Yes… ok sure you did kiddo!

They mix their languages

Mixing languages is totally normal with bilingual kids, and I think it is cute. It means they are learning. It can also be funny when other people are around and they hear it. Some think they are confused. If my little one doesn’t know the word in English, he just replaces it with the Italian word and says the sentence like it’s normal.

Or when he was a little younger he learned all the colours in Spanish first, so he always said things like “Can I have the amarillo cup” (yellow).

Sometimes I don’t even realise because my husband and I code switch a lot ourselves, so I don’t even correct him, I just answer. When I do realise though, I ask him to repeat it in English to see if he knows it.

They prefer words in certain languages

My toddler especially prefers certain words in certain languages. For example he loves to say “baccio” in Italian instead of “kiss” in English, even though he knows the English word well. If I correct him, he just repeats “baccio, baccio baccio”. There are a few other random words he likes too.

Here are some more cute and funny things from Bilingual Kidspot followers!

Courtney Douglas  from Italy says:
I often overhear my boys playing legos and they say “Let’s play tourists”. They speak Italian with an very exaggerated American accent and say things like “vogliamo noleggiare una macchina” (we want to rent a car). “Dove è il bagno?” (Where is the bathroom). Obviously having been born and raised in Italy they speak Italian like natives with no accent. But when they play this game they speak Italian and sound like Mommy.

They love to repeat things in all of their languages

Rocio Vidales from Liverpool UK says:
My son sings the “Daddy Finger song in English, French and Spanish, so it takes forever to finish it! Also i find he automatically translates French songs into English and they sound very weird as no rhyme at all. He is 2.5 years old so i still have to guess a lot what he is saying, it makes my day!

These are just a few of the cute funny things bilingual kids say and do. My children are still young now so I am curious about what they will come out with in the future. Do you have any others to add? What is the funniest or cutest thing your bilingual child has said or done? 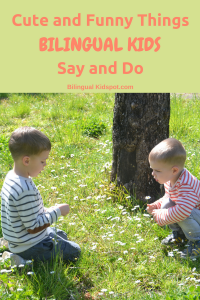