Raising a bilingual child can have it’s challenges no matter which languages you are teaching your children. But sometimes, something from your cultural heritage can have such a great impact and help you through the tough times.

Hazuki is a Japanese mother living in Hamburg, Germany with her German husband and 2 year old daughter. She tells her story of how origami helped her through a dark and emotional time in her life, and how the Japanese tradition passed down from her mother, made such a positive impact on the way she is raising her bilingual child.

Hazuki has also generously provided Bilingual Kidspot readers with some instructions and photos of some fun easy origami activities you can do with your own kids to help them along their language learning journey.

I was three years old when my mother introduced me origami and made me a crane, the first origami creation I was able to witness. I was so impressed at how she was able to transform a flat sheet of paper into a masterpiece with her own two hands that I immediately became captivated by the paper folding art.

I fell in love with origami and it became my favourite hobby as a child. I made handcrafted gifts for my family and friends, and I even held spontaneous workshops in the park to teach other kids origami. It made them so happy, and their smile made me feel so rewarded. I loved sharing the positivity and happiness origami gave me with others.

Unfortunately as I grew older life passed by and I forgot about my passion for origami. It wasn’t until later in life that I became connected again. Little did I know, it would change my life.

Origami gave me a hope in the darkness

After living my international busy life, I moved to Hamburg Germany with my German husband in 2015. I was eight months pregnant at the time and it was a very challenging time for me. I moved to a country where I had no friends and family close to me. I was unable to speak the local language, and I gave birth to my first baby without the support of my family. 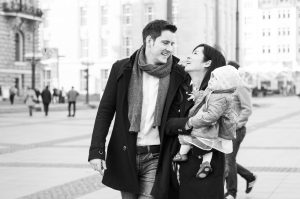 Hazuki, her German husband, and daughter

I was quite depressed for a while. I felt helpless and lonely. As I didn’t speak the language, it was hard managing my daily life. Things such as shopping at supermarkets, attending doctor appointments, taking public transport with my baby were a daily challenge. I cried everyday with her at my bare apartment and would ask myself constantly “What am I doing here?”

I felt like I was in the tunnel and couldn’t see any light or exit.

Then one day, accidentally, I came across an old moving box and found some of my old origami. I took some paper and folded a crane. The same crane my mother had created for me when I was a little girl. I showed the sculpture to my daughter. Her beautiful smile lit up the room. In that moment, I saw a small light in the tunnel and rediscovered my old passion of origami.

Creating beautiful things gave me strength and made me feel confident again. I started to create decorations and toys for the baby room and it became my little project.

My daughter helped me to rediscover my old passion and I founded Everyday Origami. I started to organize origami workshops at libraries and birthday parties I started giving private lessons for moms and exhibiting cultural events in Germany and Japan.

My mother passed away 7 years ago, but origami always reminds me of her love and her passion. Without that, I know I wouldn’t have been able to find myself again. She handed me down more than the paper folding art. She handed down a life of passion that I want to pass down to my daughter and the next generation.

As a mother who lives in a foreign country, it has been a challenge teaching my daughter my native language. But, origami has helped us form a bond and has become a fantastic way to teach my daughter Japanese.

With origami, you can create almost anything you want. From flowers, animals, dolls, food, and so many other things that children love. It is such a fun and exciting way to learn a language.

When spending time together folding origami, my daughter and I have the opportunity to talk and practice Japanese. I have been able to pass on my passion for origami to my daughter while helping her to learn my heritage language, something I am very proud of.

See part 2 of this article: Bilingual Origami Activities
Hazuki shares some fun and exciting origami activities and games that you can create and play with together, to give your child to give them more exposure to their languages. Bilingual kids learn languages better when having fun. Learn languages with Everyday Origami! 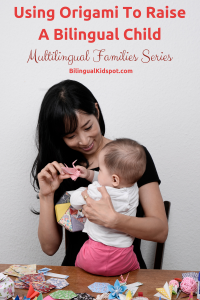