Raising Bilingual Twins: What it’s Like and What to expect

Are you raising bilingual twins? Are you expecting twins and would like to raise them to be bilingual or multilingual? Raising twins has it’s difficulties in any case, but add multiple languages and it can be even more challenging. Karin is originally from New Zealand. She and her husband are currently living in Switzerland where they are raising their children. She shares what it is really like to raise bilingual twins. 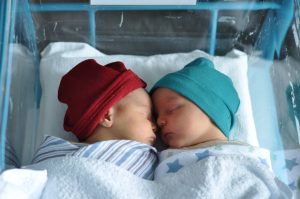 From New Zealand to Switzerland

As a high school Japanese drop-out in New Zealand, I never expected to end up learning another language. I certainly didn’t expect to end up living in a country where the spoken language is quite different from the written language, or, for that matter, in a country with three major European languages as official national languages.

If you haven’t already guessed, I’m talking about Switzerland. A tiny country in the heart of Europe that’s divided into German, French, Italian and Romansh speaking areas. We live in the German-speaking part. But although standard, or ‘high’, German is the official language spoken in schools and written in the newspapers, it’s very different from the Swiss German you hear in your local neighbourhood.

Our twins were born at 36 weeks and have hit their milestones around the same time. They were both early talkers, both said their first words at 12 months. They were really late walkers, but good communicators!

When my husband and I moved our family from New Zealand to Switzerland in 2012, our twins were eighteen months old. We have always followed the OPOL approach. My husband had always spoken Swiss German to them, and the community language had always been English.

Funnily, when we moved that didn’t really change. My German was pretty hopeless at the start, so most of my conversations were in English. I’d learnt enough before we moved to be able to manage asking for things in a shop, ordering at a restaurant, but not much more than ‘tourist’ German. 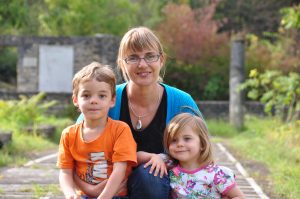 I joined a local club that offered playgroups in English and that’s where I started to make friends. So for our first year in Switzerland my kids heard mainly English. It wasn’t until they joined a local playgroup at age three, where no one else spoke English, that their Swiss German really developed.

By the time they started Kindergarten at four and a half, they were understanding and speaking Swiss German pretty well, although they still had gaps in their vocabulary and still tended to use English sentence structure. At Kindergarten they get extra German lessons (standard German) in preparation for school. Out of a class of twenty one, five kids receive this extra German support.

I do sometimes wonder if we did the right thing by not putting them into day care when they were little. At the time, when I wasn’t working at all, the cost of day care for twins just seemed too outrageous to justify.

Although my husband spoke to them every night in Swiss German, he usually only saw them for the last hour and a half of their day – in time for dinner and the bedtime routine. He was basically using the same vocabulary every night. I noticed this because I realised that I was learning the vocabulary from him too!

Here are a few issues we have come across while raising our bilingual twins:

Speech delays and other language issues are more common with twins for many reasons:

Sometimes because they simply don’t get the same amount of one-to-one interaction as singletons. Right from the start, your attention is always split.

There is a tendency to talk more ‘at’ twins than to them, simply because you’re so busy getting two babies fed, two nappies changed, two kids into their car seats.

We were lucky that our twins were early talkers and showed no signs of delayed language acquisition. 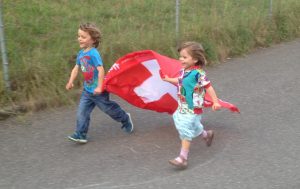 Twins have their own secret language

Twins often have their own way of communicating with each other, and may not seek out as much social interaction as other babies.

Our children developed a very basic twin language between ages 1 and  2 1/2 years old, which was a mix of English and Swiss German, and some totally made-up words thrown in. It wasn’t as extreme as some twin languages, but it was pretty cute.

It’s completely adorable watching them having a seemingly nonsensical conversation, chattering away and laughing together.

When you add a second, or even a third, language into the pot, there’s all sorts of potential for problems.

We have mostly dodged that bullet, although both kids have a mild lisp, one worse than the other.

Their tendency to copy each other’s mistakes is something we’re focusing on at the moment. Most of the problems come from borrowing grammar rules from one language and applying it to the other. 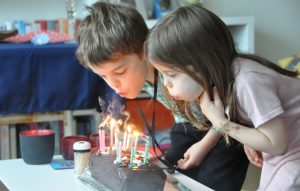 We concentrate on the Minority Language

We’ve been in Switzerland now for four and a half years, and I feel pretty well integrated into the local community. My German is much better (although not nearly perfect) and I have made Swiss friends.

The children’s friends are mostly local kids who don’t speak English, although we’re lucky to know a few families like ours. So although English is still their strongest language, I can imagine that once they’re in school, German could outstrip English.

With this in mind, some other local parents and I got together two years ago and formed an HSK (native language and culture) English association. HSK is supported by the education department, meaning that we can run English language and literacy classes for native English-speaking children on school premises, outside of school hours. We hire our own teachers and run the classes ourselves, voluntarily. It’s a lot of work, but it’s been worth it to see my children starting to learn English phonetics and building relationships with other bilingual children.

At the moment they still mostly speak English with each other. This is probably partly because Swiss Kindergarten is only three and a half hours a day, so they come home for lunch and are still with me a lot of the time. Perhaps it would be different if we lived in a country where they were already spending most of the day at school.

Preparing for school in the community language

In preparation for school, I let them watch about twenty minutes of German television a day. We also use the Ravensburger Tiptoi interactive learning system, which uses normal books and puzzles that are specially printed to allow the electronic pen to download information and stories. It’s a really cool system and a nice compromise between screen-time and book-time.

At the moment we’re walking a fine line, trying to balance developing their Swiss German with keeping up their English, then also introducing High German so that school doesn’t come as too much of a shock. Hopefully, as they grow up, they’ll continue to speak English together at home.

My husband and I have agreed that we’ll make English the home language if at any point in the future they appear to lose, or stop developing their English.

It’s been an interesting journey, so far, watching them learn and develop as individuals, as well as within their twin relationship. 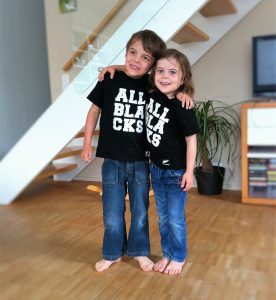 I love the way they use their languages to express themselves, how they assign languages to activities – football is spoken about in German, rugby in English, how they dream in both.

I hope our twins grow up realising how lucky they are to be bilingual and bicultural. I suspect they won’t, though. They’ll probably go through stages of being embarrassed by it, or wishing that they didn’t have to always go to New Zealand when all their friends go to Mallorca. We’ll tough it out, and hopefully end up with two happy, healthy, bi-literate adults.

This post is part of the Bilingual Kidspot Multilingual Families Series. Read other family stories here. 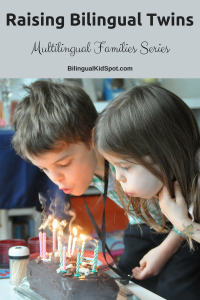