The Link Between Sleep and Language Development for Young Children: New Research

If you are a parent who is consistent with your child’s afternoon nap there is great news. Research shows that naps can actually aid in children’s language development.

A new study from the University of Arizona, found that three year old’s who napped after learning new verbs, had a better understanding when tested on them 24 hours later.

Lead study author Michelle Sandoval, who conducted the research, suggests “parents might want to keep preserving with that daily nap, even though their little ones might think otherwise”.

The researchers believe that the “slow-wave sleep” is responsible for the learning benefits of a good nap.

“There’s a lot of evidence that different phases of sleep contribute to memory consolidation, and one of the really important phases is slow-wave sleep, which is one of the deepest forms of sleep” said Rebecca Gomez, Associate Professor at University of Arizona in the US.

“What’s really important about this phase is that essentially what the brain is doing is replaying memories during sleep, so those brain rhythms that occur during slow-wave sleep and other phases of non-REM sleep are actually reactivating those patterns -those memories -and replaying them and strengthening them.” Gomez added.

All children tend to concentrate better in general when they are well rested. But we all know that some have a mind of their own when it comes to naps and bedtimes. Babies and toddlers nap more frequently, however, by the time children get to pre-school they are usually down to one nap per day, with some even skipping it altogether. It must also be noted that all children are different. While some pre-schoolers will enjoy long afternoon naps and still sleep all night long until well over three years old, some are fighting their sleep much earlier.

For many parents, it can be a struggle to get our kids to nap consistently every day. We shouldn’t worry too much though, because according to the research, it is the total amount of sleep that our children are getting that really matters.

“Preschool-age children should be getting 10 to 12 hours of sleep in a 24-hour period, whether it’s all at night or a combination of night time sleep and napping.” Gómez said.

So, if your little one is sleeping well during the night, there’s no need to worry. But, for children who are staying up later, or waking early , it is suggested that creating opportunities for them to nap could be beneficial. When children are well rested they learn better.

“We know that when children don’t get enough sleep it can have long-term consequences”. Gomez said.

Does your child get enough sleep according to the recommendations? 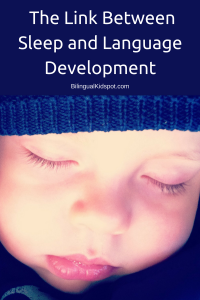