The newest American President and his Multilingual Family

Donald Trump is the newest President of the USA. He may speak only English himself, but he has quite the multilingual family. Having married three times, there are a mixture of languages spoken between his three wives and five children.

What languages do the Trump family speak?

I have scoured the internet to find out who speaks what so you don’t have to!

The President’s first wife, Ivana, is originally from Gottwaldov (Moravia), in the Czech Republic. Ivana is multilingual, speaking five languages including English, Czech, and Russian. The pair married in 1977,  and had three children, before their divorce in 1992.

The eldest son of the president, Donald Trump Jnr is multilingual. He speaks three languages. English is his mother tongue. He speaks French, which he learned at school, and he is fluent in Czech, his mother’s native language. Donald Jr spent a lot of time with his maternal grandparents, who lived with their family while he was young, six months out of a year. He also spent many Summers in Prague with his grandfather fishing and boating.

The president’s eldest daughter, Ivanka, speaks English, and  French which she learned at school. Unlike her older brother Donald Jr who speaks Czech fluently, she knows only a few words.

“I speak Czech poorly… I seem to only know the curse words! @DonaldJTrumpJr is fluent though!” she tweeted back in 2010. 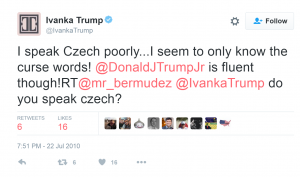 Ivanka Trump’s daughter, Arabella, speaks Mandarin. The President’s granddaughter  has been learning since she was 18 months old. Watch Arabella recite a Chinese poem.

President Trump’s middle son is Eric, the youngest from his second first wife Ivana. Eric speaks native English, and French which along with his siblings, he learned at school. He doesn’t speak any Czech, according to his mother he didn’t make an effort to learn.

In one interview, Ivana spoke about her children’s’ language abilities. “Our oldest son Donald, speaks Czech very well. Ivanka understands Czech, but the youngest is lazy. Of course, my parents now speak English well, so there’s no reason to learn, I guess. But I’m working on it. They all speak French because they have it in school”

The only American born wife of Donald Trump, Marla, as far as I found, speaks only English. The pair met in 1989, and married in 1993, after the birth of their only Daughter Tiffany. A separation and divorce followed shortly after in 1999.

The only child of Marla and Donald, Tiffany Trump is not in the spotlight much like her half siblings. No confirmation on which languages she speaks, however she did attend Alabasas Viewpoint School ,where students learn French right though.  I am assuming she was raised as the President’s other children, and learned French as a second language at school.

President Trump’s current wife, Melania Trump, is originally from Slovenia She speaks and impressive five languages. In addition to her native language, Slovenian, Trump speaks English, French, German, and Serbian. The couple they met in 1998, married in 2005, and have one child together.

The only child of Donald and Melaina Trump is Barron, who is being raised bilingual with English and Slovenian, his parent’s native languages.

Melaina spoke on the “You Behar Show” back in 2011 about their now 9 year old son.

“Barron speaks two languages completely perfect.. He goes from one thing to another” the former supermodel said proudly of her sons bilingualism.

With all the benefits of bilingualism, and himself having such a multilingual family, why hasn’t Donald Trump learned a second language?