A Multilingual Family in a Monolingual Nation

Australia and the Monolingual Mindset

As an Australian who grew up monolingual, when I had the possibility to be raised bilingual, I have great admiration for families I meet who are passing on their heritage language to their children. Australia is known for being multicultural nation, celebrating diversity through different foods and festivals. It is not however, known for encouraging the use of multiple languages.

Australia is a linguistically diverse nation with over 200 languages spoken within the country, yet only 8% of high school students study a second language. There has been a lot of talk over the years about making it mandatory for children to learn a second language at school, however nothing has really been done about it. Sure, most schools have language programs, which may be a couple of hours a week of lessons, but it isn’t nearly enough for a child to become proficient in a language.

With multilingualism not widely encouraged, and with the many myths and misconceptions about children learning languages circling about, the vast majority of migrant families, or families with bilingual parents, choose to raise their children only speaking English. Many of these families, uneducated on the benefits of bilingualism think that by dropping their heritage language, it will keep them up with their peers. It just seems like such a waste.

I have got to know one family who is doing the exact opposite.

Filipa Pinto was born in Portugal, raised in France and moved to Australia 12 years ago. She speaks Portuguese, French, Spanish, and English. Her husband is from Peru and speaks Spanish, English, and some French. Together they live in Perth with their four year old son, and two and half year old daughter who are being raised to be multilingual with three languages, speaking French, Spanish, and English.

Going against the Grain

I was raised bilingually. At home in France, our family spoke only Portuguese. It’s always been obvious that my husband and I would raise our children the same way. Because our families live overseas, our children need to speak the same languages as us to be able to communicate with their grandparents and cousins.

We embrace the Australian values, but we cherish where we come from and transmit this to our children. We aim at raising global citizens, the more languages you speak the more you know and the more you want to know about the other cultures.

How they do it

We use the popular OPOL method (One Person One Language) where we speak to their children in our own native languages. I speak with the kids in French and my husband speaks to them in Spanish. English is used only with others in the community.

We never switch to English when speaking with them. I don’t forbid them from using English, but when they do, I rephrase what they have just said in French and they naturally repeat it.

Most of the time they speak French with each other as it is their dominant language at the moment, but it depends on their mood. Sometimes if my son will says something in French to my daughter and she ignores him, he will then switch to Spanish and vice and versa.

Their Spanish is advanced but not as fluent as their French. English is their minority language for now, they get that at daycare two days per week. I don’t mind because they will go to school in English and I’d rather focus on their French and Spanish.

My daughter is still young and speaks whichever language. However, when my son was about 3 years old, he wasn’t interested in speaking much English. He even told me he had enough friends who could speak French and Spanish, that he didn’t need friends speaking English.

I explained to him that soon he was to start kindergarten and no-one would speak French nor Spanish, so he would be expected to speak English there.”

As a multicultural nation you would think more people would encourage the learning of other languages but it seems that many people don’t understand.

Most of the time people are impressed with their abilities and level of proficiency at such a young age, but we do get the odd negative reaction. We are often asked why we need to teach them other languages since they can speak English. Very few people are aware that more than half the world’s population are bilingual. Just look at Africa, most of the people are fluent in two major languages and some dialects.

Also, many people don’t know how to handle multilingual children. For example, at daycare, initially my son was not very responsive in English and I was told off by the staff because he was behind in his [English] development.”

Some multilingual children may have a language delay, however it is not related to their actual development. It is more to do with how much exposure they get to the language. Children who speak the family languages at home will initially be behind in the community language, however by the time they start school, most of them are at the level of their monolingual peers.

Unfortunately there is no bilingual school that I know of in Perth. I have enrolled our children into a school which teaches French, but after speaking with the teacher, I realised that it will not be enough for their current level of proficiency. They will study with children that cannot speak a word of French when they will already be fluent.

Our aim to make them fully proficient in both French and in addition to English, so we want them to learn how to write in those languages. I have purchased all the books for each school year following the French and Spanish curriculum.” 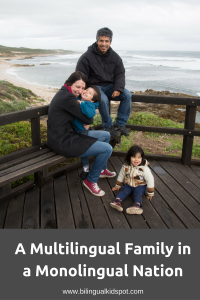 Struggling to find literature in languages other than English, I launched an international online bookstore in Australia specialising in Children’s literature.

I found it very difficult to find good children books in French and in Spanish for my kids. I asked around and most of my multilingual friends were in the same situation. This is how Le Toboggan started. Initially with French, Spanish, and Portuguese, then we added German, Italian and many more languages.

Le toboggan allows me to have the flexibility I wish, to spend more time with my children and I get to do a job that I love. My children are surrounded by books from a variety of cultures and in many languages.

I get to meet wonderful people and I am always happy to encourage and share tips with parents of bilingual children who are doubting if they can succeed in their endeavours.

They are not the only family struggling

Filipa and her family are not the only ones struggling with the monolingual culture in Australia. For such a multicultural nation, significant changes need to be made to our educational system so that we can show the world how multicultural we really are.

What are your thoughts?