If you do your research, you will find pages of articles giving you the benefits of raising bilingual children. What many of them fail to mention are the challenges and difficulties that come along with it. I have worked with many children teaching them English as a second language, and I am now raising bilingual kids myself.

Having seen and experienced many of the challenges that parents of bilingual children face, I can understand the reasons why some families choose to give up.

Here are some common challenges of raising bilingual children, and how you can overcome them.

Parents often confuse language delays with speech delays, and this is one of the most common challenges for parents. Research shows that bilingualism does not cause speech delays, however, some children may take longer to become fluent in both or all languages. While it may not be the case for all children,  it is completely normal.

It can be quite frustrating when comparing your child with monolingual children. You may think you are doing something wrong and that your child is disadvantaged, but it is not the case.

Bilingual children are exposed to double the amount of vocabulary, so sometimes it just takes a little longer to soak in. I know of some bilingual children who at 3 years old were almost non-verbal, speaking neither language, but a year later they were able to speak both languages quite fluently.

In most cases, bilingual children with fluency delays catch up with their peers before they start school.

It is not uncommon for children to start of a sentence in one language and finish in another. Children tend to use whichever words they know to express themselves, therefore if they lack the vocabulary or grammar in one language, they may just fill in the gaps with another.

When my son was first learning to speak he mixed languages all the time and family would constantly be asking me what he was saying. They thought he was confused. Sometimes he would speak in English but use the Italian grammar, meaning the sentence structure was backwards. Eg “the cat black” instead of “the black cat”.

This usually happened when he was translating for someone, or telling me something that happened when playing in Italian. He would literally translate from Italian to English without really thinking about what he wanted to say.

3. Preference of one language over the other

Bilingual Children sometimes prefer to speak one language over the other and this is normal. Usually it is the dominant language because they are exposed to it the most.

Having a preference for one language can often cause a strain on the relationship with the parent with the minority language, especially when children refuse to speak the language altogether.

While learning to speak is a natural process, reading and writing require a lot more effort. Unless you home school, or give your child a bilingual education, they will only be educated in one language.

Some children who are raised bilingually will never become proficient in both languages to the same level. There is usually one language which is stronger. In most cases, it is the language they are exposed to at school. Reading and Writing in the minority language becomes the job of you as the parents, and for many families there just isn’t time.

When a person understands a second language completely but cannot speak it, they are referred to as being passive bilingual. There can be a number of reasons for a child not speaking back in one language including: lack of vocabulary, not enough exposure to the language, and the main reason, there not being a “need” to speak the language.

This can be common in families where a parent can understand the second language. It is not always easy to be consistent, it’s tiring, and difficult to keep on top of all of the time. Sometimes it is just easier to let them respond in the opposite language because that is how they express themselves better, or sometimes you don’t even notice.

My toddler who is starting to really talk now understands and speaks more Italian. Sometimes I don’t realise that we are having a conversation in two languages, where he speaks to me in Italian and I back speak to him in English without correcting him. I have to keep reminding myself when I speak to him to correct him, and encourage him to repeat what he is saying in English even though I can understand Italian.

When deciding to raise your children to become bilingual, it is helpful to know in advance the challenges that you will face so that you can be prepared to overcome them. Raising bilingual children is not an easy road, but it is one that your children will thank you for. 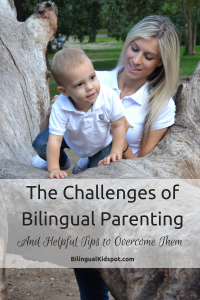